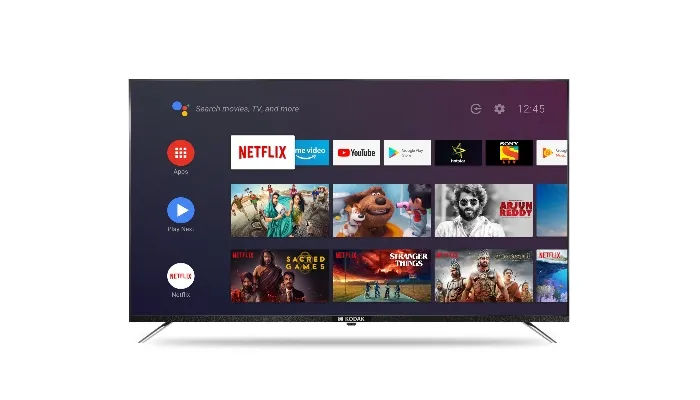 Kodak has launched its latest CA series of Android TVs today in India with a partnership with Flipkart. The TVs come with four variants – 43 inches, 50 inches, 55 inches, and 65 inches inch with bezel-less panels. The 4K Android TVs offer support for Dolby Vision, DTS TruSurround, and HDR10 that gives you truly immersive viewing experience.

Coming to the design, as I told all four TVs to come with an almost bezel-less display with Ultra HD (4K) 3840 x 2860 pixel screen resolution. According to Kodak, the Kodak CA series offers a 15 percent (178-degree) of viewing angle when compared to similar TVs in the market. The company also provides a metal stand that helps you to mount the TV on a wall.

All Kodak CA Series 4K android TV is powered by a Quad-core A53 MediaTek processor and Mali-450 Dual-core GPU. The TV runs on Android Pie out of the box and comes with support for Google Assistant and built-in Chromecast.

There is 8GB of internal storage 1.75GB of RAM and 8GB onboard. Apart from RAM, the TVs have 30W bottom-firing speaker support for Dolby Audio and DTS surround sound.

In terms of connectivity, the Kodak CA series support Wi-FI, USB 3.0, HDMI ARC/CEC, IR and Bluetooth 5.0. There are three HDMI, two USB ports, an ethernet, and an AUX port. The remote for the TV comes with dedicated shortcut keys for popular streaming services including Netflix, Prime Video, YouTube and Google Play Music.

Kodak wants to expand its business in India and give a challenge to its competitor li Xiaomi MI TV in the same price segment.