Top 10 Most Subscribed YouTubers in the World 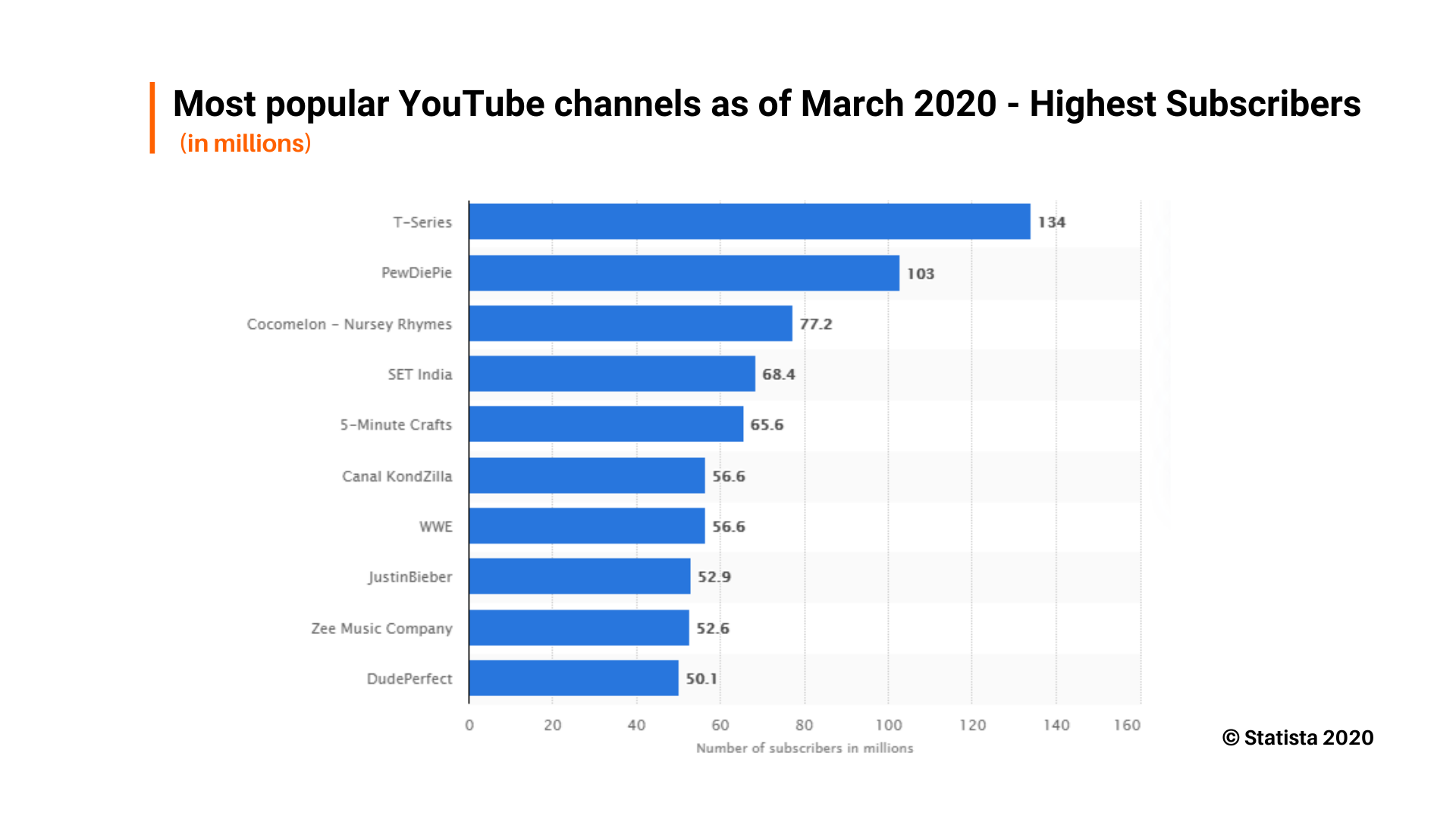 The top 10 most subscribed YouTubers 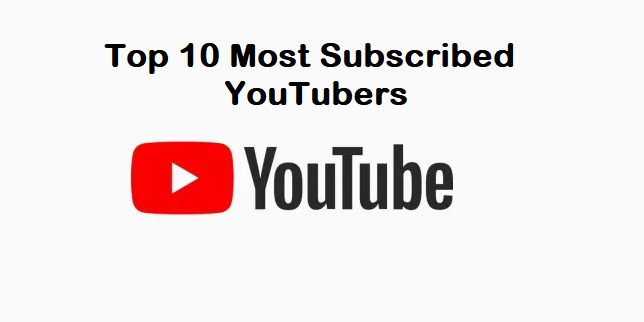 The top 10 most subscribed YouTubers

The biggest video platform in the world YouTube has so many contributors of different types that it becomes very hard to uniquely nurture a video, as whatever you think of, is available on YouTube. But from these millions of channels, there are some, which are on top of their game and people love them. It consists of both corporate and individual contributors.

These top channels with the most number of subscribers are of different niches, which shows the diversity in the taste of the users. Let’s see one by one, the top 10 most subscribed channels on YouTube, and tell us in comments about how many of them you follow.

At the top spot is the Indian music industry’s giant T- Series. We all are very much familiar with its war with PewDiePie. Yeah, T-series won that and now is way ahead. This company produces songs in many Indian languages, it was founded in 1983. One of the biggest reasons for its huge success on YouTube is the growing Indian YouTube community. We all love music and T-Series produces it, so that’s the sole reason, we are hungry and they feed us.

The other reason is its popularity over the decades. T-Series is a household name in India one of the reasons is its long history of almost 37 years. Apart from the Indian audience, T-Series is hugely popular in foreign countries as about 40% of their traffic comes from outside India. Their top viewed song ‘High Rated Gabru” has around 890 million views. Along with it, the top viewed song of India “Laung Laachi”, which has over a billion views, is on T-Series Apna Punjab channel, which is a regional channel for Punjabi songs of T-Series. T-Series won the first rank in Top 10 Most Subscribed YouTubers.

The Channel with 2nd most no. of subscribers is PewDiePie. The creator’s name is Felix Arvid Ulf Kjellberg aka PewDiePie. He was at the top spot for a long time from 2013 to 2019, before getting dethroned by T-Series. The YouTuber is famous for his witty and goofy vlogs, reactions, gaming videos, etc. In the earlier phase of the channel, he was quite popular for his commentaries on horror games, later he upgraded his content to vlogs, music videos, and comedy shorts. He has a dedicated fanbase which is called the Bro Army.

As we have told you earlier he was in a controversy with the T-Series against most no. of subscribers. This drama continued for a long period of time and finally, T-Series left PewDiePie behind. His most viewed video, “Bitch Lasagna”, which is a Diss track for T-Series, has around 251 million views.

The unique kind of channel in the list is Cocomelon – Nursery Rhymes. As you can easily suggest from the name that this channel is focused on children, How Sweet! It is the third most subscribed channel of YouTube, founded in 2005. Its content includes 3D animation videos, music, poems videos, etc. The aim of the channel is to make learning fun and attractive. It makes parenting easy as children get entertained and learn new things at the same time. The amount of hard work and their passion to make learning enjoyable is commendable.

The original name of the channel was ABCkidTV which was later changed. It brings around 2.5 billion views and around 3 million new subscribers every month.

The most viewed video of the channel is “Bath Song”, with 2.6 billion views. The trivia is that the same video is also one of the most disliked videos with 2.9 million “thumbs down”.

A subsidiary of the Japanese Sony, Sony Pictures Networks India, owns the Sony Entertainment channel. It has a YouTube channel called SET India where they release short clips of their shows, full episodes, promotional videos of the channel, trailers of new shows, and other related stuff. As the TV channel itself is a huge brand, the YouTube channel is also the same with around 72.3 million subscribers.

The most viewed video of the channel is of the show Crime Patrol Dial 100, with 131 million views.

It was one of my favorite channels at a time, is still see some of its videos for some life hacks and DIY related stuff. It is a channel that creates videos showing different ideas for crafts and other creative stuff and also the Hacks. Check out the channel, if you are not familiar with it still. Its creative and mind-blowing ideas are the reason for its popularity. It is currently at 66.8 million subscribers. Their most video has 277 million views.

One of the most popular shows WWE now has its own YouTube channel and it also has the same following as the TV show. It is the seventh most subscribed channel on YouTube. Users can watch the latest episodes of Smackdown and Raw, behind the scenes footage, classic fights, memorable events, and other related stuff. It also features interviews of popular WWE superstars.

Their most-watched video is “Randy Orton makes it Personal with Triple H”, with over 198 million views.

Another music-related channel in the list, Canal KondZilla. It has 56.2 million subscribers This channel is run by Konrad Cunha Dantas aka KondZilla, he is the owner of KondZilla Records. It is the largest YouTube channel in Brazil and Latin America. Apart from music Konrad  Dantas has also created and directed a Netflix drama called Sintonia. The YouTube channel features many music videos and behind the scenes footage. It is the second-largest music channel after T-Series.

Their most popular video is “Bum Bum Tam Tam” by MC Fioti with around 1.4 Billion views.

The once teen sensation, Justin Bieber takes the 8th spot on the list. Maybe you don’t like him but it is the truth. His channel obviously features his music videos, live concerts, and his collaborations. He is a megastar and these numbers prove it.

The channel’s most viewed video is “Sorry” with more than 3.2 Billion views.

Again an Indian music company, Zee Music Company features music videos and promotional stuff like T-Series and it is the 2nd largest music channel in India. It is owned by Zee Entertainment Enterprises Ltd. It produces music videos and movies

The content of the channel is consists of music singles and movie song videos. Their most viewed video is “Mile Ho Tum” which has over 925 million views.

Dude Perfect is a channel run by an American sports entertainment group from Frisco, Texas. There are 5 people in the group, they call themselves “5 Best Friends and a Panda,” They upload videos, consists of Trickshots like basketball trick shots and many more. The Stereotypes based videos are also their popular ones. The 5 friends are Coby and Cory Cotton, Cody Jones, Garrett Hilbert, and Tyler Toney.

Their most popular video is “Water Bottle Flip 2” with 296 million views.

This is the list of the Top 10 Most Subscribed YouTubers, we will update it every month with the latest Statistics. Keep Reading.