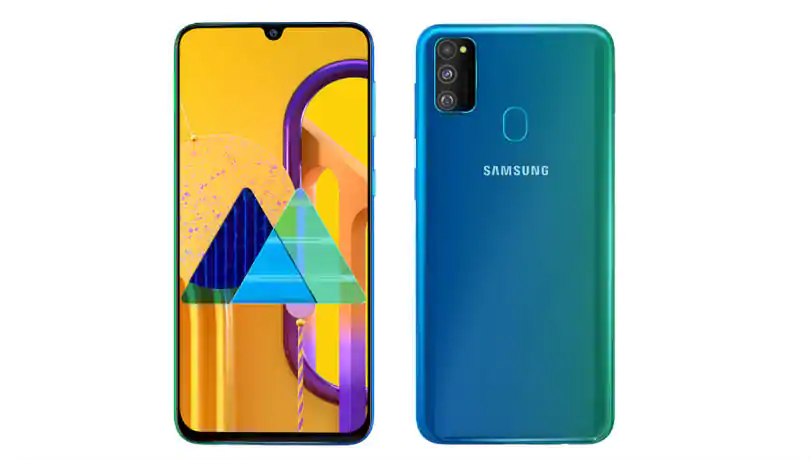 Samsung Galaxy M31 smartphone in India comes with great features that will compete with the POCO X2, Redmi Note 8 Pro and Realme 5 Pro. The new Samsung m31 is a successor to the Galaxy M30s, in the sub-Rs. 15,000 segment. It brings with minor upgrades, like new 64MP Quad-camera setup an upgrade with 48MP, and not much else.

Under the hood, the Galaxy M31 features a plastic frame and plastic back panel. This can be acceptable in the budget segment. You get a rectangular camera setup like other Galaxy and Note Smartphone series and a physical fingerprint sensor mounted on the backside of the Smartphone.

Talking about the front, Samsung offers you the same Infinity-U display panel as its predecessor, the Galaxy M30s. The smartphone comes with a 6.4-inch Full-HD+ Super AMOLED display with a 19.5:9 aspect ratio and 1080 x 2340pixels resolution protected with Corning Gorilla Glass 3. It is with 8.9 mm sleek and 191 gms heavy.

In the camera department, Galaxy M31 features a quad-camera setup, instead of the triple rear camera on the previous one. The device includes a 64MP (f/1.8) primary camera, an 8MP (f/2.2) ultra-wide-angle lens with a 123-degree FOV, a 5MP depth sensor, and a 5MP macro camera. The main highlight is the 64MP sensor which supports 4K video recording and from the front as well, Super Steady video, AR Doodle, AR Emoji, Super Slow-mo, Hyperlapse, and more. The front camera upgraded from 16MP to 32MP. The front camera also supports the Slo-mo feature.

Galaxy M31 packs with a big 6,000mAh battery, with 15W fast charger provided in the box, which will further support 18W fast charging.